Trident Yacht Club … Past and Present 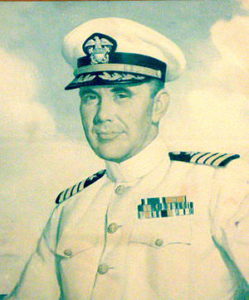 The Club was created to foster “yachting, sailing, aquatic sports, et al.”, as most yacht clubs are. However, Captain Chapin, who had strong personal and military ties to both U.S. and Canada, and who believed strongly in the countries’ cooperative relationship and friendship, actively encouraged Trident membership from both sides of the border.

The Club’s early membership and culture was a reflection of its millionaire sailor founder. It was a community of general staff officers, distinguished jurists, public servants and businessmen—from both sides of the River. Its harbour provided spaces for only 32 yachts, but the spaces were much larger, proportionate to the luxury power yachts of Trident’s members and guests.

The 70s and 80s… a difficult time in our history

By the mid-seventies, other interests led to Captain Chapin’s withdrawl from the Club. Without his leadership, members and their large power yachts drifted away, and the Club’s facilities unfortunately began to decay.

By 1980, only 12 boats were left at the Club. The West Harbour seawall was collapsing, and its backfill had leached back into the River. The floating docks were rotted and their ground tackle was incapable of standing up to a windstorm. The East Harbour was silted-in so badly that boats were largely restricted to the South Dock, and both the North and South Docks (there was no Centre Dock yet) were so damaged that they required annual patchwork welding.

Restoring Trident and growing the membership

In the late 90s, the Club completed many projects. The clubhouse was reclad, and both the Front Harbour and boardwalk were built.

In 2002, what is now known as the West Harbour (and originally owned by our founding Commodore) was purchased and integrated with the Club. It assured the landside integrity of Trident Yacht Club and permitted the Club some flexibility in planning for the future (which turns out we needed!).

Between 2005 and 2009, eight docks were installed and serviced by hydro and water in the West Harbour bringing the total number of TYC slips to 106.

Impassioned members give rise to the self-help culture

In the late 80s, a group of impassioned members started to emerge, committed to bring Trident back to its former state. 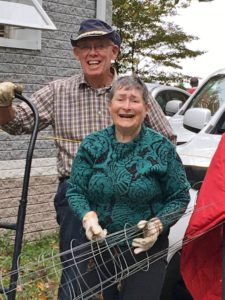 It was in this era that the culture of self-help, that we instil and require of all our members, emerged.

By the time Captain Chip passed away on July 27, 1988, he had abundant reason for pride in his Trident Yacht Club legacy, as well as what it would become in the future.

The Club we see today is an eloquent testimony to what those dedicated boating enthusiasts achieved, and to what we can do as a membership when we roll up our sleeves.

During the past decade, thanks to a thriving membership, the Club has been able to do some major improvements. around the property.

In 2008–2009, all of the floating docks were replaced throughout the club. Since that time, and as recently as 2016, some of that dock infrastructure has been strengthened, upgraded and in some cases rebuilt to maintain integrity.

In 2011, the winch drive system and control module for the masting crane was upgraded to allow more lift flexibility and safer operation for members who store their masts at Trident over the winter.

In 2014, a new more efficient and winterizable pump-out 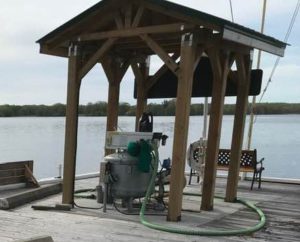 system was installed in order to service the growing membership base of the Club.

In 2015, a new boardwalk and retaining wall was installed near Trident Point, improving and securing the western shoreline in that area. In the same year, the East Harbour was dredged to ensure safe passage for members’ boats in the entrance and center channel, as well as the adjacent masting crane areas.

In 2016, men’s and women’s washrooms were all renovated and a family/handicap washroom was added.

In 2017, a beautiful walkway, known as ‘PARAGON WAY’, was installed from the main building down to the lower east parking lot, in memory of Grant Delaney: long-time member and Past Commodore.

In 2019, our masting crane was improved so that it could handle even tallest masts (up to 55′).

The Bateau Lounge floor was recovered, and new tile work was placed in front of the fireplace in the main hall.

A Culture that is Unmatched

What also cannot be understated is the incredible

culture developed, and kept vibrant, by the current membership and its direction.

It is that culture that has attracted so many new members to TYC in the past few years, and has led to a full roster of members this year